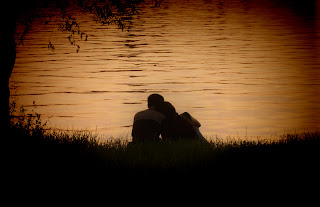 Sometimes, I never thought my life would ever go the way I planned, or at least hoped it would. I mean how could it when everything just seemed to go from bad to worse to the point where I didn't want to deal with it. I realize that we're the ones who make our own destinies, and if we believe nothing is going to change chances are they probably won't. I think I was learning to deal with that fact. The fact that maybe I was just meant to be unhappy forever. I mean happy endings only happen in fairytales right? Now I'm thinking that maybe all I needed was just someone to pull me out of the ditch that I apparently had fallen into. To make my life mean something again, to make me laugh even if there isn't a reason to, to make me smile when I have bad days because let's face it you can't run from those. I couldn't be anymore happier with the way it's going now though. I'm absolutely twitterpated I think is the word my friend and boss used. I really couldn't have asked for a better boyfriend. I think he would pretty much do anything for me, and I would do anything for him.

I've been working on writing this post for a few days maybe even a week or so, and he and I have talked about a lot of different things which for me is rare because I don't let many people in. I'm just glad that I was able to find someone. (or maybe he found me) but either way it happened, I'm glad.

In the next 2 weeks I'll actually be moving out into my new apartment with him, and I'm excited but at the same time a little nervous. I mean I've been staying with him a few nights a week so it's good.
Posted by Ashley @ Bookaholics Anonymous at 10:05 PM

A Picture is worth a thousand words

A Glimpse into my world...

Well I see you made it here to my blog. How you did that I don't know. Now that you here enjoy a glimpse into my world, my mind and all that is me.

A Nytmare in the Making

Ashley @ Bookaholics Anonymous
Ft.Worth, Texas, United States
Epilogue
I don't bite. I don't shift. I don't cast. I can't fly. I don't have fins. I just read. That is just me.

Want me to review something check first--> Review Policy